Seven Minutes Of The Taxpayers' Money

Thanks to the generosity and support of Spencer Howson, I was lucky to make my first performance on the ABC recently.

Now, when I say "first", I'm talking about first appearance with the appreciation of a functioning adult.

I'm not counting the time I got to pretend to read the news at the ABC stand at the Ekka.

Or the time I boneheaded a live cross to a news report outside a courthouse because I was looking at my phone and almost walked into the reporter.

Or the time in 1992 where I was in a 7.30 Report story about a busload of football fans who took a coach down to Sydney for the Broncos' first grand final and they asked me to retrieve a map I had in my bag and they filmed me showing it to them amd then used a voice-over that implied I was looking at a map the whole way down BUT I WASN'T I NEVER EVEN LOOKED AT IT LIE PEOPLE GET ME MEDIA WATCH.


It was a fun and exciting thing to do, doing live breakfast radio and at an outside broadcast with a live audience; rushing and frantic.  I was so out of it, I didn't even recognise Emily Seebohm sitting there in her Olympic tracksuit and gold and silver medals around her neck.  I later thought that it seemed kind of unfair how I wasn't allowed to swear on-air in the song and yet I was immediately followed by a C-bomb...  Boom.  Tish.


In the very brief interview before the song, I plugged two things I've got coming up:

This is a gig which I am doing next week that's going to be OFF THE HOOK.
Hookless.
Anti-hook.
Peter Pan. 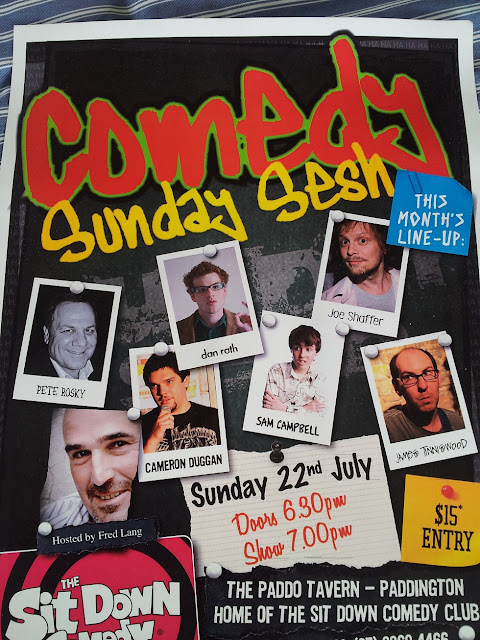 My photo is courtesy of Smurphotography.

It's a comedy showcase with some of my absolute favourite local acts - Pete Rosky, Cameron Duggan, Dan Rath, Sam Campbell and Joe Shaffer, with Fred Lang as MC.  I recommend them all.  A thoroughly funny lineup and for a bargain of a price.  REAL GOOD Yeah wow POP.

This is just a deal I'm doing - you can't get it if you book through the club or buy tickets at the door.

So buy your tickets direct from me, not through the club.  I'm going renegade on these ticket mofos like Louis.  You buy through the club for this one, then you have to pay a booking fee and all that crap.  So nuts to that and just see me about tickets.  I'd rather get you in cheaply and see a great show for less.

If you want tickets - AND YOU DO - get in touch with me somehow.

Okay, sexy cats.  See you there!

Let's be frank here: I got shit.


By the way, if you're new to me, hi.  I'm James.  How are you?  You look nice.  I'm a musician and a comedian.  I sometimes put the two together and people seem to enjoy it.

I don't want to make a bad first impression.  I'm normally very upbeat and my typing speed is above average and I think I'd be an asset to the company.

You've just caught me in a moment when I'm coming to terms with doubt and anxiety at 2 in the morning.  You picked an odd first one to read.  Basically, Papa's gonna vent.  It's going to get personal and self-loathing and emotional and will probably contain swearing and, more offensively, typos.

And I assure you, the rest of my stuff is mostly not like this.  This one is really for me; about getting stuff off my chest that had been sitting there like a bear that hibernates in summer and has a thing for chests with hair in the shape of the Batman logo.

So, go to my YouTube channel and listen to my pretty songs and watch my silly videos or read some of my older stuff then meet me back here when you've finished.  Actually, leave about six or seven months in between to accurately reflect the passage of time.

I was just getting into how I let this writing project of mine careen off the rails like a slow-mo train crash and was about to rattle off the usual myriad of excuses.  I was tired I was busy doing worthwhile things I was doing nothing worthwhile I had nothing to say I wasn't inspired Life got in the way I needed to rethink everything about me I furrrrrrgot howw to typp

Some of these were actually true.  WELL, I'VE NOW SNAPPED THE FLIP OUT OF IT.

I did post occasionally but I'll admit that they were rough.  They were just there to be there.  That's how stuff happens.  You think of it and then it's there.  Like this bit.  Some are still on the blog here, I think.

These posts attracted trolls.  One of whom - who posted under a pseudonym several times and whose comments have been removed now - flat out told me I was not funny.  What got me about this commenter was that they and I were obviously "friends" on Facebook, where, like most comedians, I would post jokes, seeking personal validation via digital thumb.  They said these were as terrible as the I posted on Facebook - "funny as a used band-aid" was one of them - before backhandedly complimenting me on my standup before telling me to give up.  Even more hurtful, it was literate and articulate - a rarity in flaming.

The sad fact is 97% of my friends outside of comedy did and do not come and see comedy, even mine, no matter how much I promote it.  They just don't. And I didn't actually start doing stand-up until quite later into my stage time at clubs.  This all led to the conclusion that it was someone from the Brisbane comedy scene.

And I have to be honest: I let it get to me.
It just crippled me.

Yes, I am fucking idiot.


I irrationally found myself unable to trust anyone in comedy, which is incredibly harsh and unfair because I know some of the most kind, beautiful and hilarious souls who get up on that stage and absolutely destroy the room and then come off and are incredibly humble. I feel the worst for ever thinking that of them.

I went through a period of a good few months where I just did not give a shit about comedy.  I was a zombie.  If I did gigs, I was totally spacing through them.  Thought about quitting because I was just getting no enjoyment anymore.

Hecklers don't bother me as much anymore.  Hecklers are temporary.  Hecklers are this comma --> , in the sentence of comedy because, even though it interrupts, you can still finish a sentence to make the comma work to your advantage.  Shrug it off.  It was one idiot who you'll never hear from again.  There's the next gig and it will be amazing.  But in this situation, it was personal.  It was clearly somebody who knew me and I knew them and I would see them at some point in the near future and I wouldn't know who it was.

And then, you know, shit, I got reflective about comedy in general.

I thought about how I fell in love with comedy, about the first time I went to MICF and fell in love with it all, about the coolness yet down-to-earth accessibility of comedians, how they were seen by me as rock stars but they were happy to have a beer with you and have a chat.  Totally my Almost Famous period.

And then I thought whether things had changed in five years.  Was it the attitude of comics or was it me?  Was it because I was now contributing as an act on stage, that I was no longer a punter in their eyes but, if not a peer, then a wannabe?  I mean, I now find it so much harder to go up to comedian of which I am a fan and have a conversation with them with the same kind of openness I had when I was just a punter.  And I questioned whether this was because of my own insecurity as a performer.  Was it that I had nothing to lose before but now I'm trying to impress?

Anyway, I never found out who it was and I don't want to know.  I don't care anymore.  It doesn't matter what they think.  It doesn't matter.  I can't control it and I hate myself for ever letting it get to me as badly as it did.

What I can control is how I feel about it.  I can control how I rationalise it.  This is an anomaly.  It does not reflect the grander scheme of things.  If I have a bad gig one night, I force myself to remember a great gig.  That's what you have to do.  You have to have faith in what you're doing and clearly, at the time, my faith was shaken.

I want.  And it's something I haven't felt in months.

This is Craig Ferguson.  He is profane, he is profound, he is 100% dead right and it took me a painfully long time to realise what he says here.

I am never going to let it happen again.