Today, I was in the food court.

With a chin being absent-mindedly stroked by my right forefinger and an upward tilt of my head, I looked at the menu of the Indian takeaway. I must have stared at it for at least fifteen seconds before my mind wandered and I was spacing.

A few seconds into my journey into no thought, a distant SNAP and sight of clicking fingers drew me back into the world. An old man - a stranger to me - had his arm raised and was snapping his fingers in my eyeline, creating a distracting obstacle between me and the Indian takeaway menu.

When he saw I was back attention-wise, his arm withdrew and his spine curled back into its apparently normal hunched forward posture. 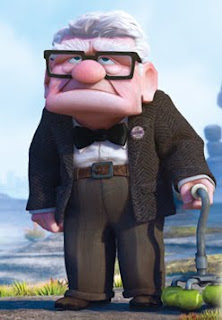 He stepped towards me, with a stony expression on his face and big black rimmed glasses. He looked to me like one of the Pixar "old man" characters (Geri from Geri's Game/Toy Story 2 or Carl Frederickson from Up) but with a few lone hairs sprouting from the left side of his chin that he'd clearly repeatedly failed to prune.

He spoke, pausing after every few words to catch his breath, as if the walk of two metres had exhausted him.

I didn't know and told him so.

"Because it was programmed by the chicken."

I didn't laugh, but I did politely smile. "Okay." His face hardly changed expression - still stony, deadpan with a few straggling hairs - but I sensed he was amused.

"You have to keep that old joke up to date, you know? Someone had to do it."

"The computer. Is it a PC or a Mac? And what operating system does it use?"

The man looked at me, stone faced and hairy chinned, for a few seconds.

He turned and walked away, to strap some balloons to his roof or not shave those hairs on the left side of his chin.