Mark Scott announced today on Twitter that, at the end of this year, Kerry O’Brien will retire from editing and hosting The 7:30 Report after a long tenure of warmly welcoming to the program. Kerry issued his own statement confirming the news.

It’s sad. People are in shock. Kerry is not dying; Kerry is not leaving the ABC. He’s leaving the program he’s been publicly associated with for 15 years. It is sad. Secretly, in the back of my mind, I also associate him with the summer of 2006.

I was in the sunset semesters of law school at the University of Queensland. At the end of the year, the UQLS (the law student society) hosts the annual Law Dinner - a formal occasion, more formal than a university ball but only because we’re seated and respectable for a good 90 minutes before the night gets alcoholically and bootyshakingly nasty. During the dinner, the semester’s valedictorian gives a speech on behalf the students before an invited guest speaker gives an address. I had never gone to a Law Dinner before. Since this would be my last time to attend, I did. I bought a ticket, sat on a table with buds from the Law Revue, put on a suit and ordered the chicken. I always order the chicken.

While the role of guest speaker is normally reserved for those in the legal profession – judges and barristers and the like – in 2006, the invited guest speaker was former Brisbane boy Mr. Kerry O’Brien. After my good friend Daniel Pizzato gave a humble, heartfelt and hilarious speech that wittily incorporated Ben Folds lyrics, Kerry was invited up. He gave a 30-40 minute speech of his reflections upon his history, the ABC, journalism ethics, media reporting during the Howard era, that ‘children overboard’ thing that was in the news. It was refreshing to me. As someone who at that point was getting jaded and dulled by law and everything law, I wouldn’t have been able to put up with a lawyer talking about the law, despite that being the appropriate audience for it. I just wanted my chicken and wine. I’m sure Kerry at the time was initially both flattered and a little confused as to why he’d been invited to a law function without any legal background.

So the speeches were over. Kerry stood around and chatted to the almost-lawyers, answering their curious questions. I know I asked at least one, but can’t for the life of me now remember it. It was silly, I know that. It got a chuckle from K-Dawg.

When the dancing started, Kerry disappeared. Well, when I say “disappeared”, he was physically still present, but he disappeared from the minds of those ready to boogie.

The alcohol and dancing started happening finally. It was a celebration. People cut loose. The ties came off. Respectability left the building in a way that only uni students can kick it out and let the door hit its cummerbund-wearing ass on the way out. It was the end of the year. For some – like me – it was the end of several years. It was one of the most fun nights I had with my friends from uni.

11 o’clock rolled around. Love Shack wound down, people cheered, the lights came up. The kick on party was at the Port Office Hotel. Hundreds of energetic almost-lawyers in messed up suits and gowns shuffled down the road which had led them up to the Victoria Park Golf Club hours before. They filed onto the chartered buses, where the enclosed space suddenly made the noise of excessively drunken and loud chatter unbearable.

Suddenly, there was a cheer. More cheering. Confusion from why there was cheering.

Then, even more suddenly, a drunken, repetitive chant began.

Kerry O’Brien – ABC personality, Walkley-award winner - had joined a bus of excitable, drunken uni students to kick on to the after-party.

He even stood for the whole trip, refusing to take seats when offered.

Despite what the Brisbane City Council may call their frequent bus services, this was a real BUZ. 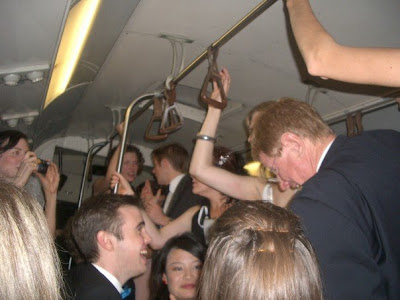 Kerry continued to chat with and entertain his young fans all the way back to the city - they couldn’t believe how cool this was. He wasn't drunk, he was just there having fun.

The bus pulled up on Edward St. out front of the Port Office. Kerry disembarked, but didn’t come into the hotel. He bade us all a fond farewell and good evening. We reciprocated our thanks with the repetitive chant and applause. We cheered as our red-haired journalistic knight disappeared into the Brisbane eve with his partner. The party kicked on, but it wasn’t quite the same without Kerry.

Since that night, I’ve forever thought of Kerry as a good sport.

For the years since, the Law Dinner has gone back to recruiting members of the legal community to address the students but I can’t picture any of them willing to be a real person, engage with the people and have some fun like Mr. O’Brien did that night. It made me respect him more.

A few months later, I encountered Kerry again – this time, in the mud-drenched fields of Woodford for the annual Folk Festival. I didn’t say anything about that night of the Law Dinner. I didn’t even say hello. I just saw him walk past, wearing jeans instead of a suit. Jeans. He walked on, cool as a cucumber.