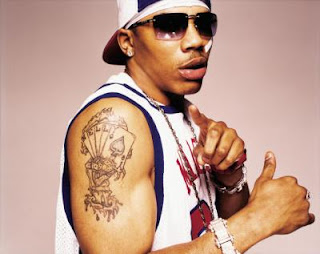 Once upon a time, I went to a Nelly concert.
Yes, I know.
Believe it.
What has two thumbs and knows it? This cracka.

What? “Who’s Nelly?” Oh, you kids today, with your Soldja Boy and your Gaga Man. Before Taylor Lautner, the celebrity most likely to take his shirt off was Matthew McConaughey and Nelly was a close second. Nelly was he who wore the Band-aid on the cheek as a sign of solidarity for his “brothers” “inside”. Oh no, he heard them Bad Boys comin’, can’t stop now, gotta continue mah runnin’, gettin’ hot in herr even when he’s with his boo (OH!).

So in 2005, Nelly did a tour of Australia. He was doing one show only in Brisbane at the Entertainment Centre. To this day, I suspect that Nelly’s promoters sadly overestimated his appeal in Brisbane.

My friend Ben rings me up that afternoon and said
“I have some tickets to see Nelly tonight. Do you want to come?”
I don’t REALLY have an interest in Nelly, not a fan, not a hater, and I can’t really affor-
“It’s free.”
I’m in.
“Do you have anyone else who’d want to go?”
None that spring to mind. I’ll get onto the Nonchalant Nelly Toleraters Club phone tree and ask around.
“If you do, bring them along. We’ve got more.”
What?
“Three more. Nobody wants to come.”
Where did you stumble upon this veritable pile of tickets worth $70 apiece, friend? Did a Ticketek printer fall off the back of a truck?

So we get to the Entertainment Centre and we’re standing in the general admission area with lots of empty seats along the sides. The arena has been halved, bisected by a big black curtain. Red flag #2. Was this intended long before or an afterthought based on ticket sales/comps throughout the day? I’m reminded of a bit of trivia about Monty Python At The Hollywood Bowl, where they didn’t sell enough tickets so they brought the pot plants at the back forward to make it seem at capacity. Subsequently, thinking of this Monty Python trivia reminds me why I’m not suited for a Nelly concert.

So the show starts. There are a few support acts who I can’t even remember anymore before Nelly comes on. Now despite the dissing tone this blog might appear to be perpetuating (OH), I was actually very impressed by Nelly’s performance. He stayed on stage and performed every song for the entire show; he didn’t turn up 30 minutes late or bugger off for ten minutes to allow the no-name backup singer to have his solo moments like Mariah Carey did at my first concert (oh god, I let that one out of the bag). He allowed a girl up on stage, he sat her down and sang her a ballad. He threatened to leave when some punk threw something on stage, but he never did. Nelly was a very cool cat.

But red flag #3 - he did that thing singers do where they stop singing for a line mid-song and hold the microphone out to the audience to sing along. OH.

Now, there are certain singers who can get away with this sneaky tactic of community because their song lyrics are memorized nay ingrained into the conscious fabric of the public. Hunters and Collectors can get away with it. Robbie Williams can probably get away with it. Bryan Adams can get away with it – hell, I remember the Summer Of ’69 video consisting predominantly of shots of audience members singing a capella. I submit that Billy Joel hasn’t actually performed Piano Man live in 15 years - he just lets everyone in the audience sing it for him. A stadium full of people paid $100+ for Billy to be their most expensive karaoke machine ever.

Nelly, sadly, isn’t one of these people.

So he goes through the show, unfamiliar song after unfamiliar song, and regularly – FREQUENTLY - dropping the music/singing for a few beats to allow the people to sing one line of a rap which nobody knows. Nobody knows Nelly lyrics except Nelly. We’re not rapping along with you - we can’t rap - we’re here to see YOU rap, we don't need no rap gaps. Example...

And he keeps doing it.

These were all obviously rap gaps that were planned and rehearsed, but because the Boondall audience just wasn’t made up of hardcore Nelly rap gap fans, it was awkward. He’d keep doing it and at the end of the song, he’d pace across the stage saying “aaiight, aaiight, not bad, not bad”. But it’s wasn’t aaiight. Each rap gap could have been accompanied the word “BUFFERING…” flashed on the screens to the side.

It's not until his biggest hit single "Hot In Herre" do people chime in with "I am getting so hot / I'm gonna take my clothes off" to mimic the backing vocals in the song.

But Nelly was a true pro and he trooped on through the show, awkward gaps o’ rap and all. I doubt he even remembers that concert now; the one in the swamp of a medium-sized Australian city whose name is often mispronounced by touring US artists of which Nelly was no exception.