It's been six weeks since I posted a video and that was just a 10 minute video blog about what I was going to see at the Comedy Festival.

Well, the fact is, I haven't had any ideas for things worth putting up on my YouTube channel. I could put shit up, but why?

If I've been doing video work, it's been the weekend shooting and editing of skits for The Complete First Season's YouTube channel and website.

It's been going slowly but progressively, considering we've all been quite scattered location-wise over the last few months, but we're about to get back into it. We've shot three sketches so far. Yesterday we reshot the first Kevin Rudd monologue with Grdo and in doing so, we came with the concept for the next Rudd monologue.

At some point, Grdo adjusted the Rudd wig so it wasn't so "mullety". I had been joking that he looked like Kevin Rudd if Kevin Rudd thought he was Luke Skywalker. He put a hair tie in it, and he suddenly reminded me of Val Kilmer in Heat. 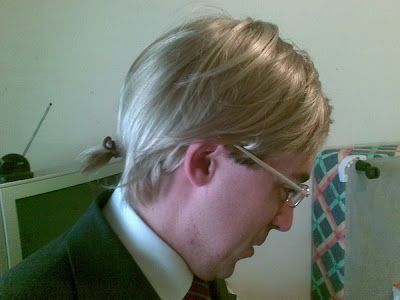 Today we shot a sketch at Marc's new apartment then spontaneously decided to go ten pin bowling. Which we hadn't done in years. The alley still had the original Time Crisis and Daytona USA games. Vintage. :D

This made me laugh though. :D

That is classic! "I whip my head to the right!"