In my opinion, the backing singers make it ten times better than it was before. Since there's four of them, it's suddenly forty times better.

Saw Slumdog Millionaire yesterday. Beautiful movie. Thought the Bollywood dance number at the end was a bit extraneous - seemed out of place with the rest of the movie - but still a very worthy nominee for Best Picture.

Seeing Frost/Nixon in an hour or two. High expectations.

Because my friends make me smile. :) 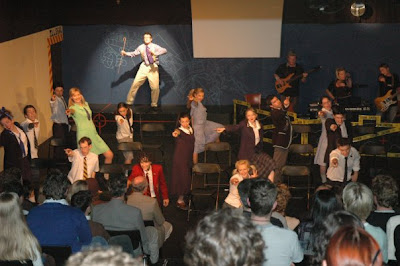 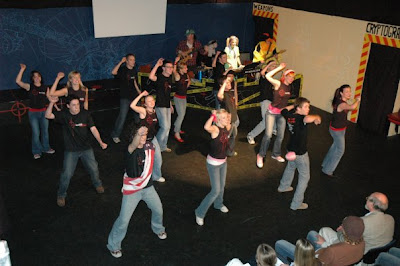 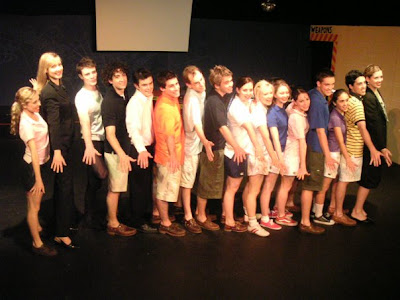 The Laws Of Stand Up

Thanks to Pete Black at Freedom To Differ, who drew my attention to this article - "To Catch A (Joke) Thief" - about the interesting research of two legal academics at the University of Virginia.

Inspired by a viral video of comedian Joe Rogan confronting Carlos Mencia onstage at The Comedy Store of joke stealing, they have researched the comedy club world for a year and examined the protective measures comedians take to ensure they aren't the victims of joke theft.

The Mencia-Rogan argument led the two intellectual property law scholars to an interesting question: With scant legal protection for their work — copyright law plays little role in comedy — why are stand-up comedians willing to invest time and energy developing routines that could be stolen without legal penalty?

After almost a year of research that included interviews with comedians ranging from comedy club circuit neophytes to seasoned veterans of television specials, Oliar and Sprigman found that the world of stand-up comedy has a well-developed system of social norms designed to protect original jokes — and that the system functions as a stand-in for copyright law.

It doesn't really provide any legal recourse in IP for the comedians whose routines are pinched - if anything they draw a distinction between written with shared authorship and jokes/routines with multiple deliverers.

Instead, there's a community enforcement regime in place. It's almost a vigilante/seeking your own justice kinda deal with comedians - they either get revenge by public shaming, boycotting clubs which hire the offenders, threats of physical violence - or they talk to the offenders, compare arguments of who told it first/longest and often simply come to an arrangement to avoid embarrassment or detriment.

Surely the performance of a very particular routine attracts some form copyright protection, right? You can't copyright an idea, but if the wording of a particular bit is replicated, it could possibly fall under Part III of the Australian Copyright Act? As a "dramatic work"? Maybe? Possibly? I don't know.

It's an interesting article to read though.

The Theme From The Office

New video to the channel. A spontaneous idea I had tonight. A silly and short musical one.

I originally wanted to do the theme from How I Met Your Mother, but I thought I'd try this one instead as a test to see how it sounds/looks...

After AusOne and picking up a dozen or so new subscribers, I've been meaning to do something actually substantial on my YouTube channel, but all I'm doing lately are silly and short ones. Which isn't a bad thing. But I'd like to get back into doing some longer sketches and shorts (3-4 minutes long).

I might do a recording of the False Assumptions song...

Oh, and Megan (jewelchic) finally got to see the song I wrote and recorded for her and she flipped for it and she left a very lovely comment back on the video. Happy Birthday again Megan! Hope you had a great day.
Posted by James at 1:41 AM No comments:

WHEW. A busy few days of filming. Even though my folks went away for a whole week and I had the place to myself, I didn't have much time to take advantage of that Tom Cruise-Risky Business style.

Thursday was out at Logan in the middle of the heat, lugging around predominantly unnecessary (but rightfully precautionary) lighting equipment. Filmed some interviews with people working as volunteers in a multicultural learning and aid centre and some volunteers at an aged care respite home. Tried a Lebanese Hawaiian pizza for lunch. Damn cheap out there. Like, 1994 prices. It almost made me wish I lived in Logan. Almost. Then the moment passed. :p

Friday was a horrifically busy day at work, but then, it's December and it's the biggest shopping centre in town. What did I expect?

Jac and I attempted to find a park at Chermside on Saturday but literally could not find a single one. We turned around and went home instead.

Sunday I wrapped a Christmas video for a mate's work - had to reshoot a scene because there was a joke involving two men getting married. Wasn't offensive in anyone's opinion - including several gay men at the work - if anything, it was in support of gay marriage, but one politically correct, super serious person got all Marge Simpson-style nervous and we had to go back to the drawing board! Oh well. The video turned out quite well. I'd post it but, well, it would be inappropriate and for internal purposes only.

Today, was out at hilly hilly Kenmore to do some more educational videos for QRC. I also discovered today that the two previous educational/experimental ones I'd shot and edited were online at a site called "Teacher Tube" - a YouTube-style video sharing site with a strictly educational focus.

Tomorrow, it's back into the breach that is Christmas retail and get into some hardcore editing for a DVD due next week.
Posted by James at 1:20 AM 9 comments:

So I went to the YouTube AusOne gathering last weekend in Sydney, and I took a camera with me but then sorta decided against it because, realistically, there were going to be dozens of cameras already, filming the same people, doing the same things. And I was pretty much right. You can search on YouTube for all sorts of clips of things shot from different angles and edited differently. :p

The only thing I ended up shooting was this little snippet waiting for the plane...

At this point, I also discovered that my little Panasonic camera I've had since January 2006 is broken - the LCD screen doesn't work if you flip it over (if you want to film yourself talking to camera) :(

It was a fun weekend - met lots of YouTubers I'd seen and subscribed to. Even though I was featured three times earlier in the year, I was really really not recognized (which is fair enough). But like I said, met a bunch of people I'd only seen previously on a 425x344 size Flash video, met some new people, subscribed to them and they likewise to me. So all in all a fun little trip.

Also made a stop at the NSW Gallery and viewed the Monet And The Impressionists exhibit. Saw the famous Water Lillies painting. A very beautiful and intellectually stimulating exhibition and I encourage people around to see it. Alex and I made many many puns about "Monet" and "money". None really stuck with me. :p
Posted by James at 11:25 PM 1 comment: