I've finished an early cut with effects etc. of the next engineering video - I'll post it in the next week, pending approval. I like it. I wish there had been more engineering kids who came to help with it, but I was very grateful to the ones who did come along for an hour or two and help out, so thank you to those guys. You'll get to see your work soon. :) 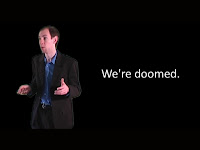 I'll try as hard as I can to get a non-engineering video posted at the same time, so that there's something for everyone.
Posted by James at 2:01 AM