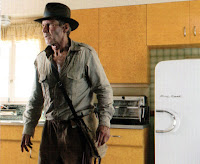 Drawn from that laugh-out loud scene in Indy 4 because it's so preposterous, the new phrase that seems to be catching on is "nuke the fridge" - a phrase which adapts "jump the shark" to cinematic franchises.

The phrase has been added to the humourous site "Urban Dictionary" as a contemporary replacement. Check out the multiple definitions and usages in respect of killing off a movie franchise.

“Peter Parker dancing around the bar in Spider-Man 3? Kinda nukes the fridge!”

Interestingly, in relation to this particular scene in the movie, I'm yet to find any commentary from Spielberg, Lucas, Ford or David Koepp. No-one's defending it yet. Are they ashamed? Are they content because it played out exactly how they wanted it to, and if people don't get it, then fuck 'em? From what I've read, the scene WAS in Frank Darabont's highly praised script that's been doing the rounds.

Perhaps this was part of the plan. They wanted a deliberately silly, B-grade moment to go with the theme of the movie. In the same way people laughed at the preposterousness of Plan Nine From Outer Space, they wanted a moment so ridiculous that the fans would go off and laugh it for being so stupid. That's what they were trying to emulate...

That's what I think.

Either way, it's earned them a buttload of dollars. Second movie of the year to cross the $300 mil mark.
Posted by James at 9:14 PM