How I Spent My Birthday

I turned 25 last Sunday. It was the first time I'd ever had a birthday that didn't feel like a birthday. That's a bad sign. It means they're all starting to blend together and losing their impact. It means I'm officially a grown up. 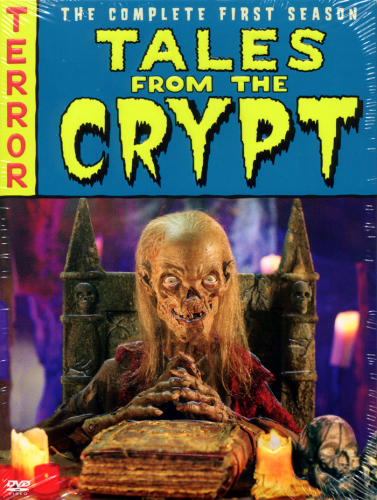 Jac (my gf) got me the coolest present: The Complete First Season of Tales From The Crypt. :D :D GLEE.

One of my favourite shows when I was younger: sexy, gory, profanity laden horror/comedy with big Hollywood creative forces involved. In the 90's, it was screened at 1 in the morning on Channel 7 and still heavily edited for TV. It's never been released on DVD outside of the States. Meaning, Jac went and imported it well over a month before my birthday and kept it completely hidden from me. My heart grew when I opened it. :D

Celebrated by performing in Showstoppers with the Ignatians Musical Society - was an excellent show featuring some very talented soloists and ensembles doing versions of two dozen songs from two dozen different musicals. This year was my "sussing out" year with the group, to see what they're like and what they do, and I feel utterly stupid for not having tried out this year. So next year, auditions for me. :)

After show drinks. Stayed for an hour. Ducked out just before the speeches started. Sara (soloist/producer/photographer) instigated a mass singing of "Happy Birthday" to me as I was trying to sneak away. I winced, but nonetheless appreciated the love.

Had to get away because I'd organized some drinks at the RE. Small turnout, but good people, good friends. :)

Woke up the next morning with a cold. You can't ask for more of a return to reality. :p
Posted by James at 2:18 AM